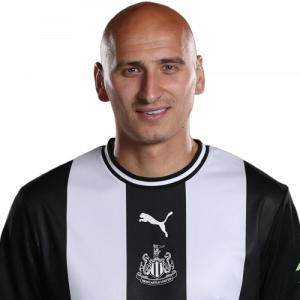 Jonjo Shelvey (born 27 February 1992) is an English professional footballer who plays as a midfielder for Premier League club Newcastle United.

He began his career at Charlton Athletic, becoming their youngest-ever player at 16 years and 59 days old. In 2010, he moved to Liverpool for an initial £1.7 million, spending a brief loan at Blackpool. During his time at Anfield, Shelvey was part of a Liverpool squad which won the League Cup and lost the FA Cup final in 2012. He joined Swansea City for £5 million in 2013, and Newcastle United for £12 million two and a half years later. A month after joining Newcastle, he was made the team’s stand-in captain, as the season ended with relegation.

On 12 January 2016, Newcastle United announced they had signed Shelvey on a five-and-a-half-year deal, for a reported fee of £12 million. Four days later he made his debut in a 2–1 Premier League victory over West Ham United, the first win for the club in seven matches. He was named man of the match for his involvement in the build-up to both of Newcastle’s goals.