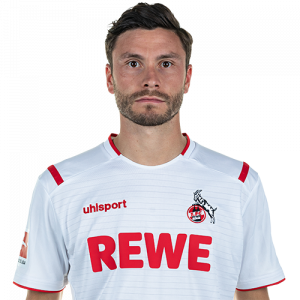 Jonas Armin Hector (born 27 May 1990) is a German professional footballer who plays as a left back and midfielder for Bundesliga club 1. FC Köln.

After beginning his youth career with SV Auersmacher in his home state of Saarland, Hector transferred to 1. FC Köln in 2010. He was promoted to the first team by coach Holger Stanislawski for the 2012–13 season and was given a debut in the first round of the DFB-Pokal against SpVgg Unterhaching on 1 August 2012. On 27 August, he made his league debut in a 2. Bundesliga match against FC Erzgebirge Aue. He established himself as a starting player for Köln during the season, making 24 appearances in the league.

In 2013–14, Hector started 33 of Köln’s 34 matches as the FC won the second division championship, gaining promotion to the Bundesliga. On 4 November 2013, he scored his first professional goal in a 4–0 defeat of 1. FC Union Berlin.

The following season, he again played in all but one of Köln’s league matches, making his Bundesliga debut against Hamburger SV on the first matchday. On 4 October 2014, he scored his first Bundesliga goal in a 3–2 loss at Eintracht Frankfurt. He was named Köln’s Player of the Season for 2014–15 by the club’s official website with 54.41% of the vote. On 31 December 2015, Hector was also named Köln’s “Winner of the Year” by Cologne newspaper Express, who named the defender the club’s “Mr. Reliable”.

On 7 February 2016, Hector captained Köln for the first time in a 1–1 draw with Hamburger SV. At the end of the 2015–16 season, Hector was reported to have the most crosses blocked in Bundesliga, recording a total of 20 blocks.

After a successful season and an impressive Euro campaign, Hector received interest from the likes of Liverpool and Chelsea, which led to negotiations on a new contract. On 14 August 2016, Hector signed a new contract until 2021.

On 23 April 2018, Hector and the Köln announced he had signed a new contract, even though the club was effectively relegated into the 2. Bundesliga at this point. After Köln’s 3–2 loss to SC Freiburg the following matchday, it was confirmed that the team had been relegated. On 12 January, he was awarded the 2018 Bundesliga Goal of the Year award for his chipped goal against Wolfsburg in the season before.