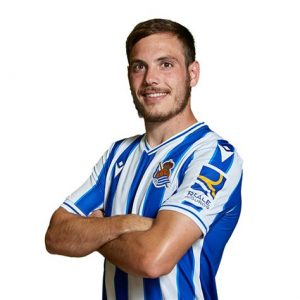 Jon Bautista Orgilles (born 3 July 1995) is a Spanish professional footballer who plays for Real Sociedad as a striker.

Bautista was born in Mahón, Menorca, Balearic Islands, but moved to Errenteria, Gipuzkoa, Basque Country at a young age. He was a Real Sociedad youth graduate after starting out at Touring KE, and was promoted to the former’s reserve team in Segunda División B on 23 June 2014 having made several appearances in that season’s UEFA Youth League.

Bautista made his senior debut on 23 August 2014, coming on as a late substitute for Eneko Capilla in a 3–3 home draw against UB Conquense for the Segunda División B championship. He scored his first senior goal on 27 September, netting the first in a 4–0 home rout of CD Guadalajara.

On 25 February 2016, Bautista renewed his contract until 2020. He appeared in his first competitive match – and in La Liga – on 24 April, replacing fellow youth graduate Mikel Oyarzabal in the dying minutes of a 0–0 away draw against Villarreal CF.

Bautista scored his first professional goal on 8 May 2016, the winner in a 2–1 home win over Rayo Vallecano. Ahead of the 2017–18 season, he was definitively promoted to the main squad.

On 11 July 2019, after being used mainly as a backup to Willian José, Bautista was loaned to Belgian club K.A.S. Eupen for one year. On 3 April 2021, he did not leave the bench for Real in the delayed 2020 Copa del Rey Final against Athletic Bilbao, which ended in a 1–0 victory.