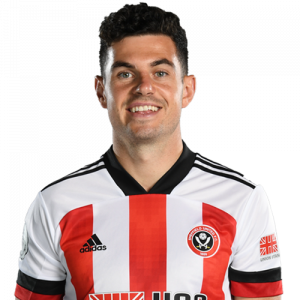 John Egan (born 20 October 1992) is an Irish professional footballer who plays as a defender for Premier League club Sheffield United and the Republic of Ireland national team.

Beginning his career at Sunderland, he had loan spells with Crystal Palace, Sheffield United, Bradford City and Southend United, but was released by the Wearside club without making an appearance for the first team. In July 2014, he joined Gillingham, and was named Player of the Year in his first season, and voted in the League One PFA Team of the Year in his second. In July 2016, he joined Brentford, where he was captain of the club in his second season. In July 2018, he rejoined Sheffield United, and was part of the team that got promoted to the Premier League.

Internationally, Egan has represented the Republic of Ireland at under-17, under-19 and under-21 level. He made his debut for the senior side in March 2017.

Egan re-joined former loan club Sheffield United on 19 July 2018 on a four-year contract for an undisclosed club-record fee. In his first season with the team, he helped them gain promotion to the Premier League. On 21 August 2020 he signed a new four-year contract, keeping him at the club until 2024.