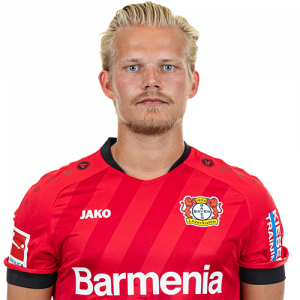 Joel Julius Ilmari Pohjanpalo (born 13 September 1994), is a Finnish professional football striker who plays for Union Berlin, on loan from Bayer Leverkusen. He represents the Finland national team. Pohjanpalo was born in Helsinki, Finland, where he played for hometown club HJK, before being loaned out at age nineteen in 2013.

Pohjanpalo made his international debut for Finland in November 2012, at the age of eighteen and has since made over thirty appearances, including playing in matches for 2018 and 2022 FIFA World Cup qualification.

In April 2014, Pohjanpalo renewed his contract with HJK, extending it to 2018. At the same time HJK extended his loan contract with Bayer Leverkusen a further two years, which Pohjanpalo spent on loan at Fortuna Düsseldorf. He was voted the 2. Bundesliga Player of the Month in October 2014, following a hat-trick against Darmstadt 98.

On 21 March 2016, Leverkusen announced that they had exercised their option to permanently sign Pohjanpalo. On 27 August 2016, Pohjanpalo finally made his debut for the club in their opening game of the 2016–17 Bundesliga season against Borussia Mönchengladbach. He scored just a minute after being substituted on, but it was not enough to prevent Leverkusen from losing 2–1. Pohjanpalo came off the bench in Leverkusen’s second game of the season and scored a hat-trick, helping his side achieve a 3–1 win over Hamburger SV. After these two appearances, Pohjanpalo had scored four goals in just thirty minutes of play during the first two matches of the season.