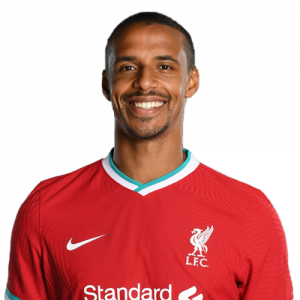 Job Joël André Matip (born 8 August 1991) is a professional footballer who plays as a centre back for Premier League club Liverpool.

He began his professional career with Schalke 04 in 2009, and was part of their teams that won the DFB-Pokal and DFL-Supercup in 2011. He totalled 258 competitive appearances and 23 goals before moving to Liverpool on a free transfer in 2016, where he won the UEFA Champions League in 2019, starting in the final. He also won the UEFA Super Cup in 2019 and the Premier League in 2020, Liverpool’s first league title for 30 years.

Born and raised in Germany, he represented Cameroon at international level and played for them at the 2010 Africa Cup of Nations and the FIFA World Cups of 2010 and 2014.