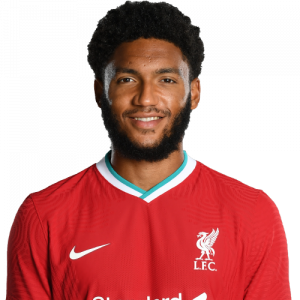 Joseph Dave Gomez (born 23 May 1997) is an English professional footballer who plays as a centre back for Premier League club Liverpool and the England national team.

Gomez began his career at Charlton Athletic, breaking into the first team at 17 and playing one full senior season before joining Liverpool in June 2015. After establishing himself as a first-team regular, Gomez struggled with injuries, but appeared in the 2019 UEFA Champions League Final as Liverpool won the competition. He played in the final of the 2019 FIFA Club World Cup with Liverpool winning the competition for the first time in the club’s history. He was part of the side that won the 2019–20 Premier League, Liverpool’s first league title in 30 years.

Gomez has represented England at every level and played every minute of every match when England won the 2014 UEFA European Under-17 Championship. He made his debut for the England senior team in November 2017.