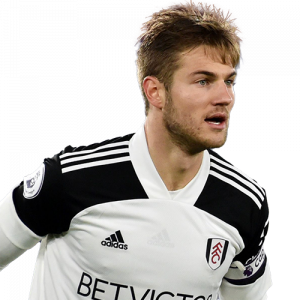 Joachim Christian Andersen (born 31 May 1996) is a Danish professional footballer who plays as a centre-back for Premier League club Fulham, on loan from Lyon, and the Denmark national team.

He represented Denmark at U16, U17, U19, U20, and U21 levels before he was called up to the senior team for matches against Kosovo and Switzerland in March 2019. On 15 October 2019, he earned his first national team cap when Denmark beat Luxembourg 4–0.

On 5 October 2020, Andersen joined Premier League club Fulham on a season-long loan. On 19 December 2020, Andersen saw himself sent off in a 1–1 draw with Newcastle United, receiving a second yellow when he gave away a controversial penalty for a foul on Callum Wilson which was dispatched by the latter. Andersen was nominated for the league’s Player of the Month award for February 2021 after a number of impressive defensive displays that saw Fulham concede just three goals in six matches as they picked up a vital nine points in their fight against relegation. On 19 March 2021, Andersen scored his first Fulham goal in a 1–2 home league defeat to Leeds United.

Andersen is considered a great ball playing defender with the ability to play in both right and left side of the central defense and even in defensive midfield. In the 2018–19 season, Inter Milan midfielder Marcelo Brozović was the only player in Serie A with more accurate long passes than Andersen.