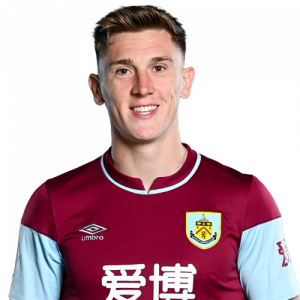 James Gerard Dunne (born 19 October 1997) is an Irish professional footballer who plays as a centre back for Burnley.

Dunne played locally in Ireland before joining the youth set-up at Manchester United in 2007. After transferring to Burnley in 2016, he spent time on loan at Barrow (where he made his senior debut in August 2017) and Accrington Stanley (where he made his Football League debut in January 2018).

Born in Dundalk, Dunne began his career with St Kevin’s Boys before joining the Manchester United Academy in Belfast at the age of 10.

In July 2016, Dunne signed a two-year contract (with a further year’s option in the club’s favour) with Burnley. In July 2017, he moved to National League side Barrow on a six-month loan. He made his senior debut on 5 August 2017.

In early January 2018, the club confirmed Dunne’s loan would not be extended and he would return to parent club Burnley. Later that month he joined EFL League Two club Accrington Stanley on loan for the remainder of the season. He made his Football League debut on 6 January 2018.

On 17 September 2020, Dunne made his senior debut for Burnley in the 2nd round of the EFL Cup, in a 1–1 draw against Sheffield United which Burnley eventually won on penalties. He scored on his Premier League debut on 20 September 2020, in a 4–2 defeat away at Leicester City.