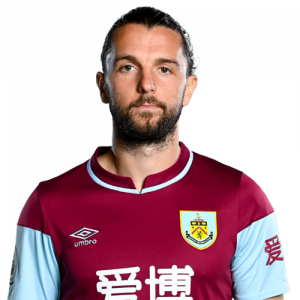 Jay Enrique Rodriguez (born 29 July 1989) is an English professional footballer who plays as a forward for Premier League club Burnley.

Rodriguez began his career with his hometown club Burnley, for whom he scored 41 goals in 128 appearances across all competitions from his debut in 2007. In 2012, he joined Southampton for around £7 million, where his form earned him his only England cap, but missed over a year with injury.

Rodriguez won himself a contract with Burnley and was promoted to the senior squad at the end of the 2006–07 season after progressing through the youth ranks at the club and completing his two-year apprenticeship. He was the only player to be signed by Burnley manager Steve Cotterill from the seven youth players available at the time.

He made his first team debut for Burnley in the Championship on 29 December 2007, when he came on as a late substitute for Stephen Jordan in the 1–0 defeat to Bristol City at Turf Moor. Rodriguez finished the 2007–08 season on loan at Scottish First Division club Stirling Albion after signing in January 2008. He continued to train with the Clarets whilst reporting for Stirling on match days. He made his debut for Albion a day later in the 3–0 defeat against Celtic in the fourth round tie of the Scottish Cup at Celtic Park. He came on as a second-half substitute for David McKenna. He made his first start a week after against Livingston, but after the match he then faced a six-week absence through fatigue and lack of fitness. His first match back on 1 March saw him come off the bench to score a consolation in the last minute and his first professional goal away at Morton which ended in a 2–1 defeat. He stayed with Stirling until the end of the campaign and also scored goals against Livingston and St Johnstone, but these goals weren’t enough to keep Albion up and they were relegated after finishing bottom of the table.

Rodriguez was given his first appearance of the 2008–09 season on 23 September 2008, when he scored his first goal for Burnley in the League Cup third round against Fulham, coming on as a late substitute securing a win in the 88th minute. He started featuring regularly in the first team as a substitute and followed this up with goals against Queens Park Rangers in the FA Cup, and scored a dramatic goal against Tottenham Hostpur in the League Cup semi-final, equalising the tie on aggregate making it 4–4 late on, and although Burnley went on to win the match 3–2 on the night, the tie finished 6–4 to Spurs on aggregate after late goals in extra time from Jermain Defoe and Roman Pavlyuchenko. His first league goal for Burnley came on 11 March 2009 in a 4–2 victory over Crystal Palace at Turf Moor. He then scored a stunning goal three days later in an emphatic 5–0 home victory over Nottingham Forest, which later on won him the accolade of Burnley goal of the season. His first start for the Clarets came a month later on 11 April 2009 in the Championship match against Queens Park Rangers in a 1–0 win. Rodriguez was also played a part in Burnley’s play off campaign which saw them promoted to the Premier League after victories over Reading, and a 1–0 Championship play-off final win over Sheffield United at Wembley Stadium. He featured in this match as a substitute replacing Steven Thompson.

Following the club’s promotion to the Premier League in 2009, Rodriguez injured an ankle while playing for the reserves and found it difficult to break into the first team. On 1 February 2010, he completed a one-month loan move to Barnsley. He scored on his debut for Barnsley against Preston North End.

On 9 August 2011, Rodriguez scored four goals in the League Cup first round against Burton Albion. His first two were from the penalty spot in normal time, with the other two from open play in extra time to make the score 6–3. His first and second league goals of the season came in a 5–1 win against Nottingham Forest, opening the scoring and adding a second goal 10 minutes later. On 26 November 2011, he scored a 93rd-minute winner in a 3–2 win away to Hull City. He scored again three days later in the following match in a 4–0 win at home to Ipswich Town. His first goal of 2012 came on 7 January in an FA Cup third round match away to Norwich City. He scored his first league goal of 2012 the following match in a 2–0 win away at Middlesbrough. On 31 January, he scored two goals as Burnley beat Nottingham Forest 2–0. He scored again the following match in a 1–1 draw at home to Peterborough United, this time rescuing a point for Burnley as he scored a terrific solo goal, dribbling the ball from near the centre circle before scoring. This was his 17th goal of the season in all competitions. Rodriguez finished the season as Burnley’s top goalscorer with 21 in all competitions which helped him earn a place in the Championship PFA Team of the Year.