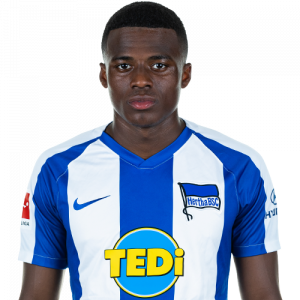 Javairô Joreno Faustino Dilrosun (born 22 June 1998) is a Dutch professional footballer who plays as a winger for Hertha BSC. He has represented the Netherlands internationally on youth level from U15 through to U21 and has made one appearance for the senior side.

Youth career
Dilrosun began his youth career in 2006 at Ajax, before moving to the youth academy of English club Manchester City in 2014. In 2016, he was promoted to City’s under-23 side playing in the Premier League 2.

Hertha BSC
On 3 May 2018, German club Hertha BSC signed Dilrosun from Manchester City for the 2018–19 season. He signed a four-year contract lasting until 2022.

Dilrosun made his professional debut for Hertha on 2 September 2018, coming on as a substitute in the 6th minute for the injured Karim Rekik in the Bundesliga match against Schalke 04. He assisted Ondrej Duda in the 15th minute for Hertha’s opening goal, with the match finishing as a 2–0 away win. Dilrosun scored his first Bundesliga goal for the club the following matchday, opening the scoring for Hertha in the 61st minute after starting the match against VfL Wolfsburg on 15 September, which finished as a 2–2 away draw.