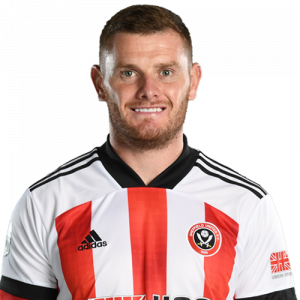 Jack William O’Connell (born 29 March 1994) is an English professional footballer who plays as a centre back for Premier League club Sheffield United.

O’Connell began his career at Blackburn Rovers and came to prominence after captaining Rochdale to promotion from League Two in the 2013–14 season. He joined Championship club Brentford in February 2015, and remained there until July 2016 when signing for Sheffield United of League One. O’Connell was capped by England at under-18 and under-19 level, captaining the latter team.
O’Connell began his career with the youth team at Liverpool County Premier League Premier Division club REMYCA United at the age of 16. He made seven appearances in the first team before being named their Youth Player of the Year for the 2010–11 season.

O’Connell was capped once by the England under-18 team, playing the full 90 minutes of a 3–0 friendly victory over Poland on 7 March 2012. He made his debut for the under-19s in a 3–0 2013 UEFA European Under-19 Championship qualification win over Estonia on 26 September 2012. O’Connell won four further caps during the qualifying round, including three as captain. He won eight caps at under-19 level.