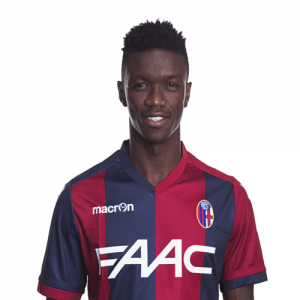 Ibrahima Mbaye (born 19 November 1994) is a professional footballer who plays for Italian club Bologna F.C. 1909. He plays as a right-back.

Born in Guédiawaye, a suburb of Dakar, Senegal, Mbaye was signed by Italian club Internazionale in summer 2010, from the Senegalese youth football academy Étoile Lusitana, and formally in January 2011, after his 16th birthday. He was a member of the Inter U17 youth squad. In 2011–12 Mbaye was promoted to the Inter Primavera (reserve team) coached by Andrea Stramaccioni. The primavera team won the 2011–12 NextGen Series under Stramaccioni and the league under Daniele Bernazzani, after Stramaccioni was promoted to first team coach. Stramaccioni included Mbaye in the first team on 28 April 2012. However, he did not enter the line-up including bench.

In July 2012, Stramaccioni named Mbaye in the pre-season camp. The squad which consisted of 26-men who were not involved in the UEFA Euro 2012 tournament. Mbaye played in pre-season friendlies and won the 2012 TIM Trophy. On 27 July 2012, Mbaye was named in the B-list – main squad for 2012–13 UEFA Europa League as he was not yet eligible for List A. Mbaye made his debut in the return leg of the third qualifying round after Inter had defeated Hajduk Split 3–0 away. Yuto Nagatomo was rested and Mbaye occupied the left-back position. However, in September, Mbaye was stripped from the squad for the group stage as there was no room for him to occupy one of the 17 foreigner quota.

Few weeks after his 18th birthday, Mbaye signed a new-contract with Inter.

On 23 January 2015, Mbaye signed on loan for Bologna until the end of the season with obligation to buy set at €3 million, depending on whether or not the club is promoted to Serie A next season. Bologna got promoted to Serie A at the end of the season with Mbaye playing a major role to getting the team back to the Italian top league. He was offered a contract to stay permanently at Bologna, leaving Inter Milan after more than five years.