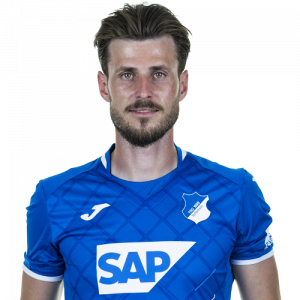 Håvard Nordtveit (born 21 June 1990) is a Norwegian professional footballer who plays as a defender or defensive midfielder for 1899 Hoffenheim and the Norway national team.

On 20 June 2017, West Ham announced that Nordtveit had signed for German side 1899 Hoffenheim, for an undisclosed fee. Upon joining the club, he was given a number six shirt for the side.

Nordtveit made his Hoffenheim debut, where he started the whole game, in a 1–0 win against Rot-Weiß Erfurt in the first round of the DFB–Pokal. He then made his UEFA Champions League debut in the Play–Off Round First Leg against Liverpool, where he started the whole game and set up the club’s only goal of the game, in a 2–1 loss. In the return leg against Liverpool, however, Nordtveit was unable to help the club make a comeback, as they lost 4–2, eliminating the side to the UEFA Europa League. Since making his debut for Hoffenheim, he became a first team regular for the side for the next two months. But Nordtveit was plagued with injuries and lost his first team place for the next six months. During the sidelined, he did appear five times between the six months, three of them were starts. It wasn’t until on 17 March 2018 when Nordtveit returned to the first team, coming on as a 81st minute substitute, in a 3–3 draw against his former club, Borussia Mönchengladbach. Following this, he then featured six out of the seven remaining matches of the season. At the end of the 2017–18 season, Nordtveit made twenty–three appearances in all competitions.

At the start of the 2018–19 season, Nordtveit was involved in the first team, playing the club’s first five matches of the season. He then scored his first Hoffenheim goal, scoring from a header, in a 2–2 draw against Shakhtar Donetsk in the UEFA Champions League match on 17 September 2018. However, Nordtveit suffered a thigh injury that kept him out for weeks. It wasn’t until on 27 October 2018 when he returned from injury, coming on as a 63rd minutes substitute, in a 4–0 win against VfB Stuttgart. Nordtveit then appeared in the next five matches since returning from injury. However, he suffered another injury after suffering from bone edema and never played for the club for the rest of the 2018–19 season.Despite being plagued with injuries, Nordtveit made ten appearances and scoring once in all competitions.

Following his return from a loan spell at Fulham, Nordtveit, however, found himself behind the pecking order at Hoffenheim’s squad and was placed on the substitute bench. It wasn’t until on 5 October 2019 when he made his first appearance of the season, coming on as a 79th minute substitute, in a 2–1 win against Bayern Munich. Nordtveit then suffered a bruised rib and didn’t play for two months, even after returning from injury. It wasn’t until on 17 December 2019 when he returned to the first team, coming on as a 60th minute substitute and set up the club’s second goal of the game, in a 2–0 win against Union Berlin.  As the 2019–20 season progressed, Nordtveit continued to be in and out of the starting eleven for the side despite having injuries along the way. Despite the season was suspended because of the COVID-19 pandemic, he finished the 2019–20 season, making twelve appearances in all competitions.