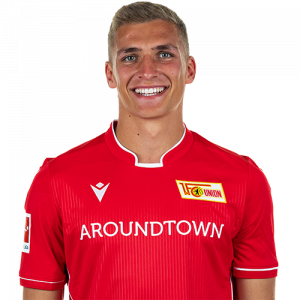 Grischa Prömel (also spelled Proemel, born 9 January 1995) is a German footballer who plays as a midfielder for Union Berlin.

Club career
Prömel began his professional career with Karlsruher SC having joined them from TSG Hoffenheim’s second team in 2015. In June 2017, after playing more than 40 times, Prömel left Karlsruher SC following their relegation from 2. Bundesliga and signed a three-year contract with 1. FC Union Berlin. He was sent off via a straight red card late on in his second game for his new club against Nuremberg which resulted in a two-match suspension.

International career
He was part of the squad for the 2016 Summer Olympics, where Germany won the silver medal.