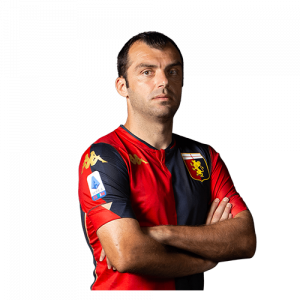 Goran Pandev (born 27 July 1983) is a Macedonian professional footballer who plays as a forward for Italian club Genoa.

He is the captain of the North Macedonia national football team, and is the country’s all-time top scorer with 37 goals.

After establishing himself at Lazio, Pandev moved to Inter Milan in early 2010. While playing for the Nerazzurri, Pandev collected a host of honours including winning the 2009–10 Serie A, the 2009–10 Coppa Italia and the 2009–10 UEFA Champions League as part of a treble for the club. On 22 April 2021 he became the first Macedonian to score a 100 goals in one of the top five football championships.

Genoa
Pandev signed a two-year contract with Italian club Genoa in 2015 after failing to get playing time at Galatasaray.