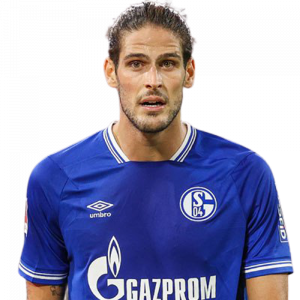 Gonçalo Mendes Paciência (born 1 August 1994) is a Portuguese professional footballer who plays as a centre forward for German club FC Schalke 04 on loan from Eintracht Frankfurt.

Formed at Porto, he appeared mainly for the reserves during his spell, playing only 16 competitive games with the first team and also being loaned four times. In 2018, he signed with Bundesliga club Eintracht Frankfurt.

A former youth international for Portugal, Paciência made his senior debut in 2017 and scored his first goal in his second match.

Porto
Born in Porto, Paciência joined FC Porto’s youth system at the age of only 8. He made his senior debut on 12 January 2014, starting for the B team in a 2–0 home win against Portimonense S.C. for the second division. He scored his first goals in the competition on 22 March, helping to a 2–2 away draw with C.D. Feirense.

Paciência first appeared in competitive games with the main squad on 21 January 2015, again acting as starter in a 1–1 draw at S.C. Braga in the Portuguese League Cup. He netted his first goal in the same competition, in a 4–1 home victory over Académica de Coimbra that took place the following week.

On 29 July 2015, Paciência joined Académica in a season-long loan. On 31 August 2016, still owned by Porto, he moved to Olympiakos FC. His spell at the latter club, which was undermined by heart problems, was concluded in December.

Paciência continued to be loaned the following seasons, to Rio Ave F.C. and Vitória de Setúbal. On 25 August 2017, while at the service of the latter club, he scored an own goal in an eventual 1–1 away draw against C.F. Os Belenenses, coached by his father. On 27 January 2018, he netted early in the final of the League Cup and also converted his penalty shootout attempt, in a loss to Sporting CP after a 1–1 draw in regulation time.

Eintracht Frankfurt
On 12 July 2018, deemed surplus to requirements as practically all Portuguese players by manager Sérgio Conceição, Paciência signed a four-year contract with German club Eintracht Frankfurt. He made his debut on 18 August in the first round of the DFB-Pokal, in which he came on as a late substitute and scored a consolation in a 2–1 defeat for the holders at Regionalliga team SSV Ulm 1846. In September, he suffered a knee injury in training which sidelined him for several months.

Paciência scored seven Bundesliga goals in 2019–20 campaign for the ninth-placed side (ten across all competitions). On 15 September 2020, he joined FC Schalke 04 on a year-long loan with an option to make the move permanent. His maiden league appearance took place three days later, when he started in the 8–0 away loss against FC Bayern Munich.