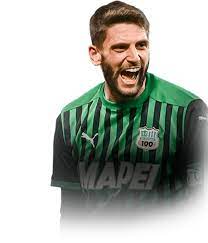 Gian Marco Ferrari (born 15 February 1992) is an Italian professional footballer who plays for Serie A club Sassuolo and the Italy national team as a defender.

Ferrari joined Renate on loan from Parma in the summer of 2011.

In June 2015 Crotone excised the option to sign Ferrari on a permanent deal.

On 4 August 2017, Ferrari was signed by another Serie A club U.C. Sampdoria.