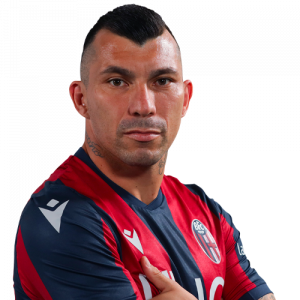 Gary Alexis Medel Soto (born 3 August 1987) is a Chilean professional footballer who plays for Italian club Bologna and the Chile national team as a centre-back and a defensive midfielder.

Medel has played club football with several teams in numerous countries, starting out with Chilean side Universidad Católica, and later playing for Argentine side Boca Juniors, Spanish side Sevilla, Premier League side Cardiff City, and Italian side Inter Milan, before moving to Beşiktaş in Turkey in 2017. He then moved back to Italy and joined Bologna in 2019.

On 29 August 2019, Medel signed a three-year contract with Serie A club Bologna for a reported fee of €2.5 million. He debuted for Bologna against rivals SPAL on 30 August 2019.