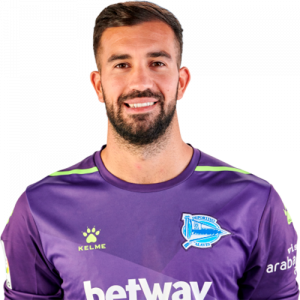 Fernando Pacheco Flores (born 18 May 1992) is a Spanish professional footballer who plays for Deportivo Alavés as a goalkeeper.

Real Madrid
Born in Badajoz, Extremadura, Pacheco played for two local clubs before joining Real Madrid in 2006, aged 14. He made his senior debut on 28 August 2011 with the C team, playing for the Tercera División championship against CF Rayo Majadahonda.

Pacheco appeared in his first game with the main squad on 20 December 2011, coming on as a late substitute for fellow youth graduate Antonio Adán in a 5–1 home victory over SD Ponferradina in the round of 32 of the Copa del Rey. In 2012–13, he alternated between starting duties in the third side and the occasional callup to the second, making his debut in Segunda División on 2 June 2013 in a 4–0 home win against AD Alcorcón. He kept his position the following match – the final in the second-tier campaign – at Girona FC.

Pacheco made his first start for the first team on 2 December 2014, in a 5–0 rout of UE Cornellà in the domestic cup where he featured the full 90 minutes. Later that month, he was the unused third-choice goalkeeper as the Blancos won the FIFA Club World Cup in Morocco.

Alavés
On 7 August 2015, Pacheco signed a three-year deal with Deportivo Alavés of division two, with Real Madrid having a buy-back clause He made his debut for the club on 22 August, starting in a 3–2 away win against SD Huesca.

Pacheco was an undisputed starter for the Basques in his first season, appearing in 40 league matches – missing one due to injury and being a substitute for Pau Torres in the last matchday – as they achieved promotion back to La Liga after ten years, as champions.

Pacheco’s maiden appearance in the Spanish top flight occurred on 21 August 2016, in a 1–1 draw away with Atlético Madrid. He only missed two games in 38 during the campaign, and his team finished comfortably in mid-table.

On 13 June 2020, Pacheco was sent off for handling the ball outside the penalty area in the 19th minute of a 0–2 loss at bottom-placed RCD Espanyol.