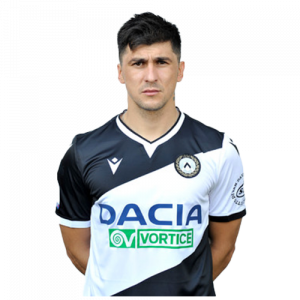 Fernando Martin Forestieri (born 15 January 1990) is a professional footballer who plays as a striker for Serie A club Udinese.

orn in Argentina, he is of Italian descent and a naturalized Italian citizen, and has represented Italy U21.

Genoa
In January 2006, Genoa signed Forestieri on a three-year contract. Boca tried to keep the young player, but failed to do so. In March, Boca contested the regularity of the transfer and, refusing a €300,000 indemnification from Genoa, the Argentine club submitted the case to the AFA. That summer he played some friendly matches with Genoa, and in one of them Torino president Urbano Cairo saw Forestieri in action and offered €500,000 for him, but Genoa refused.

On 8 November 2006, Forestieri made his official debut with Genoa in a Coppa Italia loss against Empoli. Forestieri made his Serie B league debut on 13 January 2007, on an away match lost 2–1 to Pescara, by scoring for Genoa. He then played as a regular with the Genoa Primavera youth team that won the 2007 International Viareggio trophy.

On 25 July 2007, Siena announced that they had signed Forestieri from Genoa in a co-ownership deal, for €1.7 million, to compensate the transfer debt to Siena involving the transfers of Andrea Masiello and Abdoulay Konko to Genoa. He made his Serie A debut on 26 September, coming off the bench in a match against Atalanta. On 13 January 2008, Forestieri scored his first goal for Siena after being brought on as a substitute against Internazionale in a 3–2 loss.

On 25 June 2008, Genoa acquired the entirety of his transfer rights for €4.5 million (with Siena acquiring half of Manuel Coppola for €1.5 million and the full rights of Abdelkader Ghezzal for €3.5 million), successively loaning him out to Siena for another season, but in the first part of the season with coach Giampaolo he played only in two games.

In January 2009, he was loaned to Vicenza in Serie B, where he scored 5 goals in 19 appearances.

Udinese
In July 2009 Forestieri agreed for a move to La Liga, joining Málaga on loan from Genoa and Udinese. He was sold to Udinese Calcio in co-ownership deal on 28 July, for €1.5million. He scored his only goal for the club on 20 December 2009 in 2–1 win against Mallorca.

In summer 2010 he failed to find a new club and stayed at Udinese’s youth team. Udinese held some club friendlies for players pending to leave, credited the team as Udinese B. He failed to leave the club and played for Udinese’s Primavera youth team.

In January 2011 he had been sent to Serie B club Empoli.

On 15 July 2011 he was signed by newly relegated Serie B team Bari along with Zdeněk Zlámal., which Udinese bought him outright from Genoa on 7 July. He would be a potential replacement of Paulo Vitor Barreto who was bought back by Udinese in June.

Watford
On 31 August 2012, Watford signed Forestieri on loan from Udinese. He scored his first goal against Huddersfield Town on 29 September and then got sent off three days later against Charlton Athletic. Watford goalkeeper Manuel Almunia has claimed to see likenesses to Lionel Messi and says he has a bright future, but must avoid getting involved with referees. Forestieri scored his second Watford goal against Leicester City in November which proved to be the decider as Watford emerged as 2–1 winners. Forestieri became an instant hero[citation needed] at Vicarage Road and was nicknamed Fessi by the Watford faithful – again a reference of his likeness to his Argentine compatriot Lionel Messi.

On Monday 14 January 2013, the striker signed a permanent five-and-a-half-year deal with the club. Forestieri scored his first goals as a permanent Watford player against Sheffield Wednesday on 5 March 2013 – netting a brace at Vicarage Road in an emotional 2–1 win where Forestieri was spotted crying and kissing the Watford badge after the final whistle, and three weeks later Forestieri scored another brace, this time against Burnley on 29 March 2013.

Sheffield Wednesday
After a below par 2014–15 season (despite winning promotion to Premier League) with Watford, scoring only 5 goals in 25 games, mixed with the combination of constant manager changes, Forestieri found himself sliding down the pecking order at Vicarage Road. Forestieri found himself subject to immense interest from clubs in the Championship including Leeds, Reading and Sheffield Wednesday. On 29 August 2015 Sheffield Wednesday completed the signing of Forestieri on a four-year deal, for an undisclosed fee believed to be around £3,000,000. He became the 14th summer signing by the Owls, and the 3rd to move from Vicarage Road to Hillsborough along with Lewis McGugan and Daniel Pudil. He made his Owls debut in the 3–1 away defeat to Burnley on 12 September. He was Wednesday’s top goalscorer with 15 in all competitions.

Forestieri won the Player of the Year award at the end of the 2015–16 season. On 9 January 2017, Forestieri extended his contract with Sheffield Wednesday by a further year, committing until the summer of 2020. On 24 June 2020, it was announced that he had declined a new contract and would be leaving the club on the 30 June.