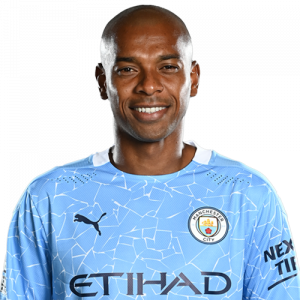 Fernando Luiz Roza (born 4 May 1985), known as Fernandinho (meaning “Little Fernando”), is a Brazilian professional footballer who plays as a midfielder and central defender for Premier League club Manchester City, whom he captains, and the Brazil national team. He has also captained Brazil on many occasions.

Fernandinho started his career at Brazilian club Atlético Paranaense before moving to Shakhtar Donetsk in 2005, where he became one of the best foreign players to ever play in the Ukrainian Premier League. With Shakhtar, he won six Ukrainian Premier League titles, four Ukrainian Cups and the 2008–09 UEFA Cup. He was voted by the Shakhtar Donetsk fans as the best Brazilian player to ever play for the team. In 2013, he joined Manchester City, where he has since won three Premier League titles, among other trophies.

The scorer of the only goal in the final of the 2003 FIFA World Youth Championship and a full international for Brazil since 2011, he was part of their squad which came fourth at the 2014 FIFA World Cup and also competed at the 2015 Copa América, the 2018 FIFA World Cup, and the 2019 Copa América, winning the latter tournament.

On 6 June 2013, Fernandinho became Manchester City’s first signing of the summer, for a fee of £34 million. He signed a four-year deal and is understood to have waived around £4 million owed to him by Shakhtar in order to complete the transfer, as he was desperate to secure a move away from the Ukrainian club. During his time at Shakhtar, the Brazilian wore the number 7 shirt, but due to midfielder James Milner already occupying the number at City, Fernandinho had to choose another. In an interview with Manchester City, Fernandinho recalled a conversation with his son in which his son said, “My dad is the new number 25,” and so Fernandinho subsequently chose 25 as his new number.