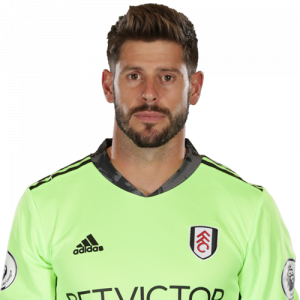 Fabricio Martín Agosto Ramírez (born 31 December 1987), known as Fabri, is a Spanish footballer who plays as a goalkeeper for Premier League club Fulham.

He appeared in 56 La Liga matches over six seasons, representing Deportivo La Coruña Real Valladolid, Real Betis and Mallorca in the competition. He also played professionally in Turkey and England, winning the Süper Lig championship with Beşiktaş in 2016–17.

Fabri was a Spanish international at under-20 level.

Beşiktaş
In July 2016, Fabri moved abroad for the first time, signing for Turkish Süper Lig champions Beşiktaş JK. In a 0–6 loss at FC Dynamo Kyiv in the group stage of the UEFA Champions League on 6 December, he began to cry after conceding the fourth goal of the first half.

Fabri only missed two matches in 34 in his first season in Istanbul, as his team were crowned champions for the second consecutive time and 15th overall.

Fulham
On 24 July 2018, Fabri joined Premier League club Fulham on a three-year deal with the option of a fourth year. He was already known to their goalkeeping coach José Sambade Carreira, with the pair having worked together at Deportivo. His first appearance in the Premier League took place on 11 August, in a 0–2 home defeat against Crystal Palace.

On 2 September 2019, Fabri was loaned to RCD Mallorca for one year. His competitive input during his tenure at the Visit Mallorca Stadium consisted of four games, underperforming in his sole league one at Valladolid.

International career
A former youth international for Spain, in February 2018 Fabri announced that he was of Uruguayan descent and wanted to represent its national team at the 2018 FIFA World Cup.