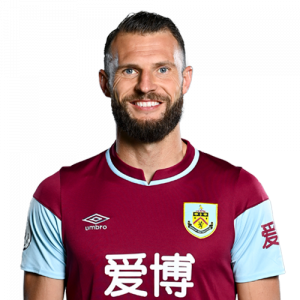 Erik Pieters (born 7 August 1988) is a Dutch professional footballer who plays as a left back for Premier League club Burnley.

Pieters began his career with Utrecht and made his professional debut in August 2006. He impressed enough at the Stadion Galgenwaard to earn a move to PSV Eindhoven in July 2008 for €2.5 million. At PSV he won the Johan Cruijff Shield in 2008 and the KNVB Beker in 2011–12 and also became a regular member of the Dutch national team. Injuries hampered his progress in 2012–13 before he moved to English side Stoke City in June 2013 for €3.6 million. Pieters spent six years with the Potters making 206 appearances before joining Burnley in July 2019.

Early career
Born in Tiel, Pieters grew up in Enspijk and started as a central midfielder in the juvenile ranks of VV Rhelico in Rumpt. There he was scouted by FC Utrecht and, after a trial period, he joined the Utrecht youth academy.

Utrecht
Pieters made his Eredivisie debut for Utrecht in a 2–1 defeat against Willem II and went on to make 29 appearances in his maiden season as Utrecht finished the 2006–07 season in 9th position and they went on to win in the Intertoto Cup playoffs. In the 2007–08 season, Pieters made his European debut in July in the Intertoto Cup. He made 35 appearances and scored twice against Willem II and FC Groningen as Utrecht finished in 10th position. His solid performances attracted the interest of PSV Eindhoven.

PSV Eindhoven
On 9 July 2008, it was confirmed that Eredivisie champions PSV Eindhoven had signed the left back for reportedly €2.5 million. Pieters was given the number 14 shirt, which was previously worn by Slobodan Rajković. He made his PSV debut in the league against his former club in a 5–1 win. His UEFA Champions League debut came in September against Atlético Madrid. After a bright start to his PSV career, he was benched after some indifferent performances. In 2008–09 Pieters played 23 times for PSV as they finished in 4th position, winning the 2008 Johan Cruijff Schaal by beating Feyenoord 2–0.

The following season, Pieters regained his place in the starting eleven and played his part as PSV went on an unbeaten run for the last two months leading up to the winter break. His season was interrupted by a knee injury sustained while on international duty and he returned to within two weeks. The 2009–10 campaign saw PSV finish in 3rd position and reach the round of 32 in the UEFA Europa League. Pieters played 48 times in 2010–11 as PSV came close to reclaiming the Dutch title, finishing third four points off champions Ajax and he also helped PSV beat Feynoord 10–0. The 2011–12 season saw Pieters struggle with a fractured metatarsal and played 25 times before deciding to undergo foot surgery.

He made his return from injury in a league match against PEC Zwolle on 18 January 2013 after a nine-month layoff, and with PSV losing 3–1 Pieters was sent-off for a foul on Fred Benson. Such was Pieters’ anger that he ran down the players entrance and punched a window, badly cutting his arm and was ruled out for a further three months. He returned in the top-of the table clash with Ajax towards the end of the 2012–13 season, replacing Jetro Willems after 73 minutes. A mix up with Pieters and PSV goalkeeper Boy Waterman allowed Derk Boerrigter to scoring the winning goal and Ajax went on to win the Eredivise.

Stoke City
Pieters signed for English club Stoke City on 28 June 2013 on a four-year contract for a fee of €3.6 million (£3 million). After agreeing to join Stoke, Pieters revealed that his main ambition was to play in England. – “Of course, I’ve always wanted to play in the Premier League. It’s one of the hardest competitions to play in with some great players and teams and I’m really excited about it. I’m really looking forward to playing for this Club. It’s important for me that the first impression is good and I’ve got a great feeling about Stoke City.” He made his debut for Stoke on 17 August 2013 in a 1–0 defeat against Liverpool. Pieters scored his first goal for Stoke on 12 April 2014 in a 1–0 win over Newcastle United after his intended cross beat Tim Krul. Pieters played 39 times for Stoke in 2013–14 as they finished in ninth position in the Premier League.

Pieters retained his place at left-back under Mark Hughes in 2014–15, playing in 32 matches as Stoke finished in ninth position. Stoke suffered a number of defensive injuries during the season with Pieters suffering from a groin injury. Stoke ended the campaign with a 6–1 victory against Liverpool. Pieters signed a contract extension in December 2015, keeping him contracted at the club until 2020. Pieters played 41 times for Stoke in 2015–16 as the Potters again finished ninth. At the end of the season Opta Sports revealed that Pieters made more tackles than any other defender in the Premier League during the campaign.

Pieters again remained Hughes’ first choice left back in 2016–17, making 38 appearances as Stoke finished in 13th position. Pieters was criticised at times during the campaign by supporters due to some poor performances and assistant manager Mark Bowen admitted that Pieters “has come off his standards”. Pieters was fined £70,000 by manager Paul Lambert in March 2018 after attending a late night party just hours before a league fixture against Everton. Pieters played 32 times in 2017–18 as Stoke suffered relegation to the EFL Championship. Pieters began the 2018–19 season with two rare goals against Preston North End and West Bromwich Albion.

On 31 January 2019 Pieters joined French club Amiens on loan for the remainder of the 2018–19 season. Pieters played 15 times for Amiens helping them avoid relegation.

Burnley
On 8 July 2019, Pieters signed for Burnley for an undisclosed fee.