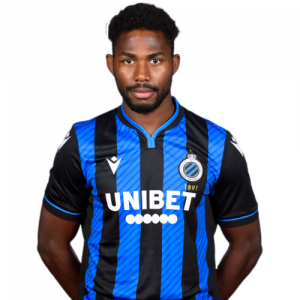 Emmanuel Bonaventure Dennis (born 15 November 1997) is a Nigerian professional footballer who plays as a striker for Bundesliga side 1. FC Köln on loan from Club Brugge, and the Nigeria national team.

Zorya Luhansk
In March 2016, Dennis signed with Ukrainian Premier League club Zorya Luhansk. He made his debut in a game against Olimpik Donetsk on 24 July 2016, where he scored the opener in a 3–0 victory.

Dennis started the season on the bench mostly before being given his UEFA Europa League debut to Feyenoord on 3 November, which ended 1–1. After impressing against Feyenoord, he also played in the Ukrainian side’s other group stage games, to Fenerbahçe and Manchester United. Zorya ended up losing 2–0 in both matches and ending up getting eliminated from the group after finishing last in their group.

On 11 December, Dennis scored his first goal in a 2–0 win over Stal Kamianske. His performances attracted both Manchester City as well as an unknown Bundesliga side, who were interested in signing him in the winter transfer window. However, Dennis instead ended up staying with Zorya for the rest of the season, helping them to a third place in the league with his six goals in 22 league appearances.

Club Brugge
Club Brugge announced on 30 May 2017 that they had signed Dennis on a four-year-deal for a fee of €1.2 million. He was given the number 42 jersey shirt. Dennis started the season extremely well, scoring five goals in six matches, including one on his debut on 26 July 2017 to İstanbul Başakşehir, a 3–3 draw and a brace three days later in the league over Lokeren, which finished in a 4–0 victory.

On 1 October 2019, Dennis scored twice in a 2–2 draw at the Santiago Bernabéu Stadium against Real Madrid in the group stage of the 2019–20 UEFA Champions League season.

1. FC Köln
On 25 January 2021, Bundesliga side 1. FC Köln announced that they had signed Dennis on a loan deal until the end of the season.