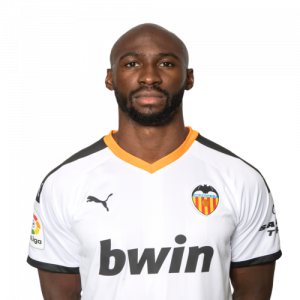 Eliaquim Hans Mangala (born 13 February 1991) is a French professional footballer who plays as a centre-back for La Liga club Valencia.

Born in France, he moved to Belgium as a child and began his career there at Standard Liège, going onto Porto in 2011 where he won consecutive Primeira Liga titles before joining Manchester City in 2014 for £32 million. He played 79 matches for City, won the Premier League in 2017–18, and had loans at Valencia and Everton, before joining the former on a free transfer in 2019.

Mangala made his debut with the French national team on 6 June 2013 against Uruguay. He was included in the nation’s squads for the 2014 FIFA World Cup and UEFA Euro 2016, helping them finish as runners-up in the latter tournament.

Valencia
On 12 August 2019, Mangala returned to former club Valencia on a permanent basis after agreeing to a two-year contract on a free transfer. He and teammates Ezequiel Garay and José Luis Gayà tested positive for COVID-19 virus during the COVID-19 pandemic in Spain.