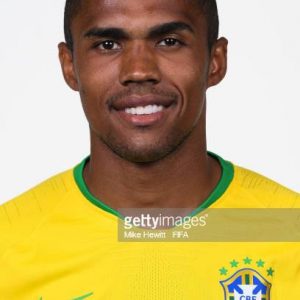 Douglas Costa de Souza (born 14 September 1990) is a Brazilian footballer who plays as a Attacking Midfielder for Bundesliga club Bayern Munich, on loan from Serie A club Juventus, and the Brazil national team.

He is known for his dribbling skills, speed, acceleration, and crossing ability.

Costa started his career with Grêmio, before moving to Shakhtar Donetsk in January 2010 for a fee of €6 million. He won numerous trophies with Shakhtar, including a domestic treble in the 2010–11 season (Premier League, the Ukrainian Cup and the Super Cup). In 2015, he joined Bayern for €30 million, where he won two consecutive league titles. He was loaned out to Juventus in 2017, and won a domestic double with the club in his first season. On 7 June 2018, Juventus made his loan move permanent; he added another two consecutive league titles in his next two seasons with the club, as well as a Supercoppa Italiana title. On deadline day of the 2020 summer transfer window, Costa returned to Bayern Munich on loan.

A full international since 2014, Costa represented Brazil at the 2015 Copa América and the 2018 FIFA World Cup.

On 5 October 2020, on deadline day, Bayern Munich announced the return of Costa on a season-long loan. On 28 November, he scored his first goal of the season in a 3–1 away win over Stuttgart.