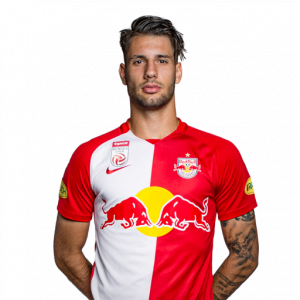 Coming through the youth system, Szoboszlai made his senior debut in 2017 with Austrian club FC Liefering, the reserve team of Red Bull Salzburg. In January 2018, Szoboszlai debuted with the parent club, becoming a starter from the 2018–19 season. Following three seasons, where he helped his club win three league titles and two domestic cups, in January 2021 Szoboszlai moved to Germany at RB Leipzig, a club associated with Red Bull Salzburg, as the most expensive Hungarian footballer in history.

Szoboszlai represented Hungary internationally, both at youth and senior levels. He made his senior debut at the Euro 2020 qualifiers, helping his country qualify to the finals by scoring in the last minute in the play-offs against Iceland.

RB Leipzig
On 17 December 2020, RB Leipzig announced the signing of Szoboszlai on a four-and-a-half-year contract, until June 2025. He became eligible to play in January 2021. With a reported price of €20 million, Szoboszlai became the most expensive Hungarian player in history.