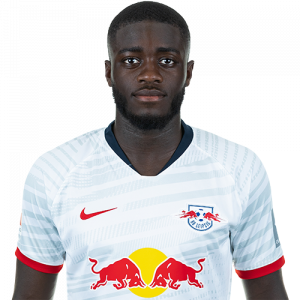 Dayotchanculle Oswald Upamecano (born 27 October 1998) is a French professional footballer who plays as a central defender for Bundesliga club RB Leipzig and the France national team. He will join fellow Bundesliga side Bayern Munich on 1 July 2021.

Early career
Born in Évreux, Upamecano joined the youth team of Valenciennes in 2013.

Red Bull Salzburg
After attracting the attention of a number of major European clubs, including Manchester United, he joined Red Bull Salzburg in July 2015 for a reported fee of €2.2 million. He was an unused substitute in Red Bull’s UEFA Champions League game against Malmö FF on 29 July 2015. He made his professional debut for Red Bull’s farm team, Liefering, two days later, in a 2–1 league win against St. Pölten. On 19 March 2016, he made his league debut with Red Bull Salzburg in a 2–1 win over SV Mattersburg.

In the first half of the 2016–17 season, Upamecano earned a regular place with the first team in both league and Europa League matches.

On 31 July 2020, Upamecano signed a new deal until 2023. In the 2019–20 season, he reached with RB Leipzig the Champions League semi-finals under coach Julian Nagelsmann.

Bayern Munich
On 14 February 2021, Bayern Munich announced an agreement for the signing of Upamecano on a five-year deal, to be effective as of 1 July 2021. The club reportedly met his release clause from Leipzig, set at €42.5 million.