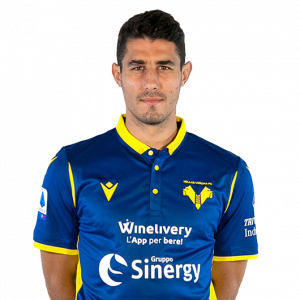 Marco Davide Faraoni (born 25 October 1991), known as Davide Faraoni, is an Italian professional footballer who captains and plays as a right back for Serie A club Hellas Verona. Faraoni is a former Italy U-21 international.

Youth career
Born in Bracciano, in the Province of Rome, Lazio region, Faraoni started his career at Rome-based club S.S. Lazio, which he could play right or centre-back.

Internazionale
Faraoni graduated from the youth team in 2011. Under new coach Gian Piero Gasperini, he played in pre-season friendlies, usually as a midfielder (wing-back) in 3–4–3 formation. and made his competitive debut in 2011 Supercoppa Italiana in Beijing. That match Gasperini used his symbolic 3-5-2 formation in the first half but changed to 4–4–1–1 in the second; Faraoni substituted midfielder Ricardo Álvarez in the 63rd minute, as a left-midfielder.

Udinese
On 9 July 2012, Udinese Calcio claimed half of the registration rights of Faraoni due to them being transferred as part of the deal that saw 50% rights of Samir Handanovič go the other way. Faraoni made his debut on 25 August 2012, in the match against Fiorentina. On 19 June 2013, Udinese redeemed the other half of Faraoni for an undisclosed fee, selling the remaining 50% registration rights of Handanovič to Inter in the same formula.

Watford
On 6 July 2013, Faraoni’s agent confirmed to Sky Sports that he would be joining Watford on a five-year deal. Watford was owned by Gino Pozzo, son of Udinese owner Giampaolo Pozzo.

Return to Udinese
After one season with Watford, Faraoni re-signed for Udinese in July 2014. On 3 September 2015 Faraoni was signed by Novara Calcio in a temporary deal.

Crotone
Faraoni canceled his contract with Udinese on 8 July 2017. On the next day, Faraoni signed a three-year contract with fellow Serie A club Crotone.