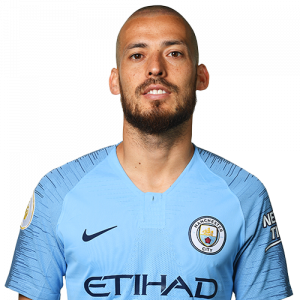 Silva plays mainly as a central or an attacking midfielder but can also play as a winger or second striker. He is predominantly a left-footed player[3] and his passing ability and possession-retaining qualities have earned him the nicknames “Merlin” and “El Mago” from his teammates and fans.[4][5] He is considered by many[who?] to be one of the best midfielders of his generation, and one of the greatest midfielders in the history of the Premier League.

Silva spent six years of his professional career with Valencia CF, appearing in more than 160 games and winning a Copa del Rey in 2008. In the summer of 2010, he moved to Manchester City and has since appeared in over 400 matches. With them he has won two FA Cups, five League Cups and four Premier League titles. He is regarded as one of Manchester City’s greatest ever players alongside Billy Meredith, Bert Trautmann, Colin Bell and Sergio Agüero. Silva has been named in the PFA Team of the Year three times. On 26 June 2019, Silva announced that he would leave Manchester City at the end of the 2019–20 season, ending his ten-season tenure at the club. On 28 September 2019, he became the youngest player to reach 200 wins in the Premier league, breaking the record set by Chelsea defender John Terry.

Silva also represented Spain, from his debut for the senior team in 2006 until his international retirement in 2018. He formed a midfield partnership with Xavi and Andrés Iniesta which led to three consecutive international tournament victories – UEFA Euro 2008, 2010 FIFA World Cup, and UEFA Euro 2012. He is one of 13 Spanish players to have amassed 100 caps, he scored 35 goals in his international career, making him the 4th highest goalscorer in Spain’s history, and also provided 29 assists, making him the second-highest assist provider in Spain’s history.

On 3 April 2021, Silva started in and played 85 minutes of the 2020 Copa Del Rey Final against local rivals Athletic Club Bilbao. The match was settled by a 63rd minute penalty from La Real captain Mikel Oyarzabal, after Cristian Portu had been brought down in the box. Silva was substituted late in the game to a standing ovation from the Sociedad bench, and along with his teammates went on to lift the Copa Del Rey, Real Sociedad’s first major trophy since 1987.[ It was the 19th major honour of David Silva’s career, and his second Copa Del Rey title. Prior to this final which was postponed, him along with fellow transferred teammate Carlos Fernández never played during the previous rounds of this tournament which took place during the 2019-20 season.