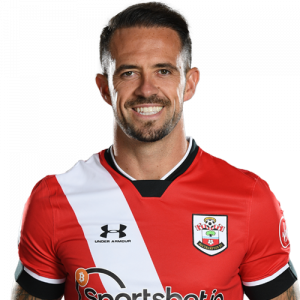 Daniel William John Ings (born 23 July 1992) is an English professional footballer who plays as a forward for Premier League club Southampton and the England national team.

ngs started his career in the youth team of Southampton but was released as a schoolboy. He subsequently joined AFC Bournemouth, progressing through their youth system, while also spending time at Dorchester Town on loan. In 2011, Ings joined Burnley with whom he won the 2013–14 Championship Player of the Year, and helped them achieve promotion to the Premier League. Following Burnley’s relegation, and the expiry of his contract with the club, Ings moved to Liverpool in the summer of 2015, but his first season at Anfield was ended after two months due to injury. His second season with Liverpool was also mired by injury, with Ings only making two League Cup appearances throughout the 2016–17 season. Ings joined Southampton on loan in August 2018, with his move made permanent on 1 July 2019 after Southampton decided to take the option to buy him based on a clause in the loan deal.

Formerly an under-21 international, Ings made his senior debut for England in October 2015.

After struggling for playing time in the 2017–18 season due to the form of attackers Roberto Firmino, Mohamed Salah, and Sadio Mané, Ings requested a move away from Liverpool in the summer of 2018. Ings was a popular figure in the dressing room and Jurgen Klopp was reluctant to let him leave in spite of his limited appearances in the previous season. Ings joined Premier League club Southampton on 9 August 2018 on an initial loan until the end of the season, which would become permanent on 1 July 2019, for a reported fee of £18 million, plus a possible further £2 million based on appearances. On 12 August, he made his debut as a second-half substitute in a goalless draw with former club Burnley. He then scored on his first start five days later in a 2–1 defeat to Everton before netting the opening goal in Southampton’s 2–0 win over Crystal Palace at the start of the following month, helping the club to their first win of the campaign.

On 16 July 2020, Ings scored his 20th league goal of the 2019–20 season in a 1–1 draw with Brighton & Hove Albion. He became the third player in Southampton history to reach the 20 goal mark in the Premier League following Matt Le Tissier and James Beattie. On 26 July, Ings converted a penalty in Southampton’s 3–1 win over Sheffield United on the final day of the league season, taking his final tally for the season to 22 goals in the Premier League, and 25 in all competitions. He finished joint-second in the Premier League Golden Boot race with Arsenal striker Pierre-Emerick Aubameyang, one goal behind Jamie Vardy of Leicester City.

On 4 January 2021, Ings scored his 50th Premier League goal in a 1–0 win over his former club Liverpool. On 14 January, Southampton manager Ralph Hasenhüttl announced that Ings had tested positive for COVID-19. As a result, Ings missed Southampton’s 2–0 Premier League defeat to Leicester. After recovering from Covid-19, Ings scored his first goal on 11 February 2021 in the FA Cup 5th round 2–0 win against Wolverhampton Wanderers.