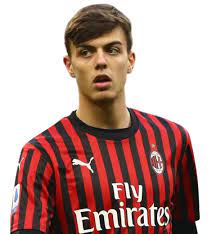 Daniel Maldini (born 11 October 2001) is an Italian professional footballer who plays as an attacking midfielder for Serie A club Milan.

Early life
Maldini was born in Milan, the second son of then A.C. Milan captain Paolo Maldini and Adriana Fossa, a model from Venezuela. His grandfather Cesare also captained Milan in the 1960s, making him the third generation to make appearances for the club. His elder brother Christian played for Milan’s youth teams and went on to play professionally at a lower level.

Daniel joined Milan’s youth system in 2010, and over the following years he came through the various age-group teams, from the under-10 Pulcini to the under-19 Primavera. In the 2016–17 season, he was part of the squad that won the Under-16 National Championship (Campionato Nazionale Under-16), defeating Roma 5–2 in the final.

Club career
Maldini made his senior debut with Milan in a 1–1 Serie A home draw against Hellas Verona on 2 February 2020, coming on as an added-time substitute for Samu Castillejo.

On 21 March 2020, it was confirmed that both Maldini and his father Paolo tested positive for COVID-19, amid its pandemic in Italy;[5] by 8 April, they had recovered.