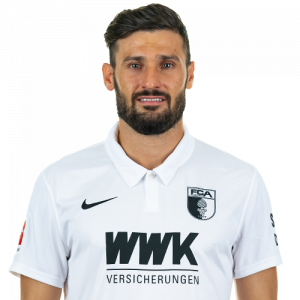 Daniel Caligiuri (born 15 January 1988) is a German professional footballer who plays as a midfielder for FC Augsburg in the Bundesliga.Born in Germany to an Italian father of partial Arbëresh descent and a German mother, Caligiuri began his professional career with SC Freiburg. Caligiuri made his Bundesliga debut for Freiburg on 7 November 2009, starting against VfL Bochum. He joined VfL Wolfsburg in 2013 after a solid season with Freiburg. On 19 March 2015, Caligiuri scored in the second leg of the round of 16 in the Europa League against Inter Milan.

On Saturday 30 May, 2015 he played as Wolfsburg won the German Cup for the first time defeating Borussia Dortmund 3–1 at the Olympic Stadium, Berlin.

On 25 January 2017, Caligiuri was announced as joining Bundesliga rivals Schalke 04 on a three and a half year deal.

On 29 June 2020, Caligiuri joined FC Augsburg on a free transfer at the end of the season. He signed a 3-year contract.