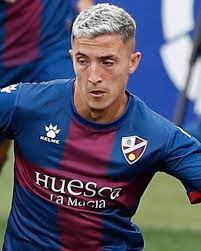 Daniel Escriche Romero (born 24 March 1998) is a Spanish footballer who plays for La Liga club SD Huesca as a winger.

Born in Burriana, Castellón, Valencian Community, Escriche joined CD Castellón’s youth setup in 2015 from Club Burriana FB. After being initially assigned to the Juvenil squad, he made his senior debut with the reserves in the regional leagues, scoring his first goal on 22 November of that year in a 6–1 home routing of Vinaròs CF.

Escriche made his first team debut for Castellón on 3 January 2016 with the age of 17 years and 284 days, coming on as a second-half substitute in a 3–0 Tercera División home win against Recambios Colón CD. On 9 August he signed for CD Lugo, returning to youth football.

On 27 May 2017 Escriche made his professional debut, replacing Iriome in a 0–1 away loss against SD Huesca for the Segunda División championship. On 17 December, he scored a hat-trick for the farm team in a 5–1 home routing of SD Outeiro de Rei.

Escriche scored his first professional goal on 22 April 2018, netting the opener in a 1–1 home draw against Lorca FC. On 15 July, he signed a four-year deal with La Liga side SD Huesca, being immediately loaned back to Lugo for the 2018–19 campaign.

Escriche returned to Huesca for the 2019–20 season, with the club now also in the second division. On 20 January 2020, he was loaned to Elche CF in the same category, until June.