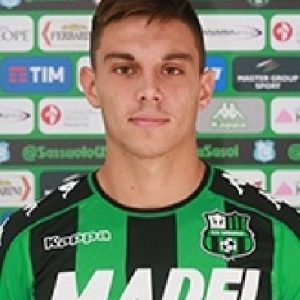 Cristian Dell’Orco (born 10 February 1994) is an Italian professional footballer who plays for Spezia, on loan from Sassuolo, as a defender.

Born in Sant’Angelo Lodigiano, Lombardy region , Dell’Orco started his senior career at Serie D club Fiorenzuola, in Emilia region. In the 2012–13 season, he returned to youth football for Parma’s reserve team. On 30 June 2013, Dell’Orco was signed by FeralpiSalò on a temporary deal. On 20 June 2014, he was signed by Ascoli on another temporary deal. During that season, he helped his side to promotion to Serie B. He had a contract with Parma which would last until 30 June 2019. However, he became a free agent on 25 June 2015, after the bankruptcy of Parma.

On 28 July 2015, Dell’Orco was signed by Sassuolo on a free transfer on a five-year contract. He wore no.39 shirt for the team. On 31 August he was signed by Serie B club Novara in a temporary deal.

On 9 August 2019, he joined Serie A club Lecce on loan with an option to buy.