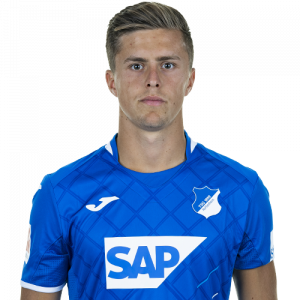 Christoph Baumgartner (born 1 August 1999) is an Austrian professional footballer who plays as a midfielder for Bundesliga club 1899 Hoffenheim and the Austria national team.

Club career
In January 2019, Baumgartner was promoted to the first team squad of 1899 Hoffenheim. He made his debut for Hoffenheim in the Bundesliga on 11 May 2019, coming on as a half-time substitute for Nadiem Amiri in the 0–1 home loss against Werder Bremen.

International career
Baumgartner appeared for the various Austrian youth national teams, from the under-15 to under-19 selections. In April 2016, he was included in Austria’s squad for the 2016 UEFA European Under-17 Championship in Azerbaijan. He scored both goals in Austria’s 2–0 win in their opening match against Bosnia and Herzegovina, with the team managing to reach the quarter-finals before losing to Portugal.

He made his under-21 debut on 10 November 2017, coming on as a substitute for Mathias Honsak in the 87th minute of the 2019 UEFA European Under-21 Championship qualification match against Serbia, which finished as a 1–3 home loss.