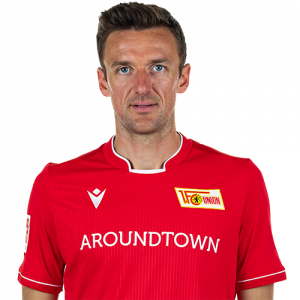 Christian Gentner (born 14 August 1985) is a German professional footballer who plays as a midfielder for Union Berlin.

He won the Bundesliga twice, with VfB Stuttgart in 2007 and VfL Wolfsburg in 2009. He was also called up five times to the senior Germany national team.

In the 2004–05 season, he played 28 times and scored six times for the Regionalliga (third division) team of VfB Stuttgart. In the same season, he had his Bundesliga debut against Hertha BSC on 20 February 2005 (1–0). He scored his first goal in a UEFA Cup game against Domžale on 25 September 2005.

On 8 January 2010, Gentner announced that he would be joining VfB Stuttgart at the end of the season. After seeing out his contract with the Wolves which ended on 1 July 2010, Gentner returned to Stuttgart on a free transfer.

On 5 July 2019, Gentner signed a contract with club Union Berlin.