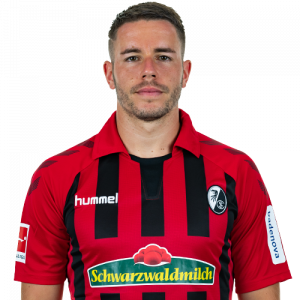 Christian Günter (born 28 February 1993) is a German professional footballer who plays as a left-back for SC Freiburg.

He began his career with the Tannenbronn team. In 2006 he transferred to the Freiburg football school. In 2012, Christian began playing for the Wolves’ reserve squad in the German regional league, at the same time he was included in the main team’s squad. On December 8, in the match against Greuther, he made his debut in the Bundesliga, replacing Vegar Hedenstad in the second half.  In the new season, he became one of the main players of the club and was able to deserve a call to the national team. On 8 November 2014, in a duel against Schalke 04, he scored his first goal for Freiburg . At the end of the 2014/2015 season, the club was eliminated from the elite, but Christian remained in the team.