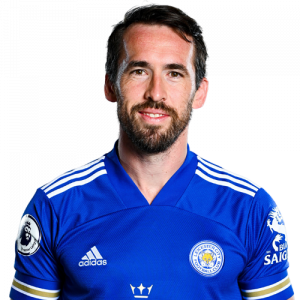 Christian Fuchs (born 7 April 1986) is an Austrian professional footballer who plays as a left back for Premier League club Leicester City and is the former captain of the Austrian national team.

He began his senior career as a teenager at Wiener Neustadt before signing his first professional contract at 17 with SV Mattersburg, challenging for the Austrian Football Bundesliga title and taking part in European competitions. In 2008, he left for Germany, signing for VfL Bochum. After a season on loan at 1. FSV Mainz 05, he signed for FC Schalke 04 in 2011, where he contested the UEFA Champions League but suffered a serious knee injury. In 2015, he signed for Leicester, winning the Premier League in his first season at the club.

A full international for a decade starting from his debut in 2006, Fuchs earned 78 caps for Austria, making him their eighth-most capped player of all time. He played for the nation at UEFA Euro 2008 and UEFA Euro 2016, captaining them for the first time in 2010 and on a permanent basis from 2012, before retiring from international duty in 2016.

Early career
Born in Neunkirchen, Lower Austria, and his father was an amateur goalkeeper. He began as a forward at local team SVg Pitten before moving to 1. Wiener Neustädter SC at the age of 11. At the age of 15, while still an amateur and at mainstream school, Fuchs played for their senior team. When he was 17, he signed his first professional deal at SV Mattersburg, a team who despite coming from a town of 6,000 drew league record average crowds of 17,000, came third in the Austrian Football Bundesliga and played in European competition.

Prior to UEFA Euro 2008, he joined the German side VfL Bochum. He later described it as a useful move to play regularly while attracting attention from bigger teams. In 2010, he was signed on loan by 1. FSV Mainz 05, a newly promoted team who ended the season in the top five.

In his time at the team from Gelsenkirchen, he competed in the UEFA Champions League, but suffered a long-term knee injury.

Fuchs in a league match against Chelsea on 14 January 2017
On 3 June 2015, Leicester City announced the signing of Fuchs on a free transfer, signing a three-year deal with the Foxes effective from 1 July. Signed under previous manager Nigel Pearson, Fuchs didn’t have a regular spot in new manager Claudio Ranieri’s squad until October. Fuchs made an appearance in Leicester’s third round League Cup tie against West Ham United, providing an assist for Andy King’s extra time winner. Following a 2–5 loss to Arsenal on 26 September, Ranieri elected to shake up his defensive back four, inserting Fuchs and teammate Danny Simpson in place of Jeffrey Schlupp and Ritchie De Laet, respectively. Fuchs made his first Premier League start the next week against Norwich.

In his first season, Leicester finished as champions on odds of 5,000–1, making Fuchs the first Austrian to receive a Premier League winners’ medal since Arsenal’s Alex Manninger in 1998. Following the insertion of Fuchs into the lineup on Matchday 8, Leicester City led the Premier League in clean sheets along with Arsenal, with 15. Fuchs himself led the league during this period in successful tackles with 77, while finishing second in interceptions with 98.

Prior to signing for Leicester, Fuchs had an offer to play in the United States, where his family live, but he turned it down for financial reasons. He said in March 2016 “My intention is to play in the US. I have come [to Leicester] for three years. I decided that I would sign one last contract in Europe, when I left Schalke, then go to the US.”

On 21 October 2016, Fuchs signed a new contract with Leicester, keeping him with the club until June 2019. The next day, Fuchs scored his first goal for Leicester against Crystal Palace, volleying home a corner-kick clearance by Christian Benteke for the team’s final goal in a 3–1 victory.

In May 2019 he signed a new one-year contract with Leicester.