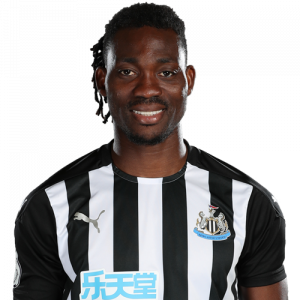 Christian Atsu Twasam (born 10 January 1992) is a Ghanaian professional footballer who plays for Premier League club Newcastle United and the Ghanaian national team. He primarily plays as a winger, although he has also been deployed as an attacking midfielder.

He began his career with Porto, also spending a season on loan at Rio Ave. In 2013, he was signed by Chelsea for £3.5 million, who subsequently loaned him to Vitesse Arnhem, Everton, AFC Bournemouth and Málaga. After spending the 2016–17 season on loan at Newcastle United, he completed a permanent transfer to the club in May 2017.

On 31 August 2016, Atsu joined Newcastle United on a one-year loan deal with an option to buy clause in the contract. On 13 September, his debut for the club came on as a substitute for Yoan Gouffran in the 61st minute in a 6–0 away victory against Queens Park Rangers at Loftus Road, where he provided the assist to Aleksandar Mitrović to earn their fifth goal. Atsu scored his first goal for the club in a 1–0 win against Rotherham United on 1 October, followed by further goals against Cardiff City and Wigan Athletic.