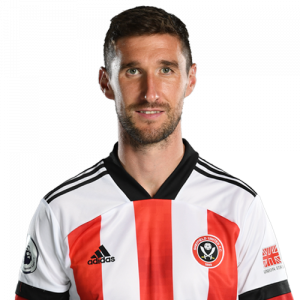 Christopher Paul Basham (born 20 July 1988) is an English professional footballer who plays as a defensive midfielder or centre back for Premier League club Sheffield United.

Having started as a junior with Newcastle United, he played for Bolton Wanderers, as well as having loan spells at Stafford Rangers and Rochdale, prior to joining Blackpool in August 2010.

On 5 June 2014, Basham signed a three-year deal with Sheffield United on a free transfer after his contract with Blackpool came to an end. Upon joining the club, Basham was given number six shirt for the new season.

n July 2017, Basham penned a new two-year contract with the Blades having played a key role in United’s title winning promotion from League One. On 28 April 2019, Basham saw his second promotion in three seasons with United as the Blades were promoted to the Premier League. On 1 August 2020, Basham signed a new two-year deal at Sheffield United. Basham won the Player of the year award and Players’ player of the year award for the 2019–20 season.