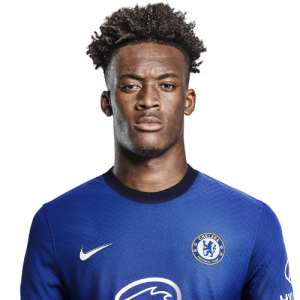 Callum James Hudson-Odoi (born 7 November 2000) is an English professional footballer who plays as a winger for Premier League club Chelsea and the England national team.

During his time with Chelsea’s academy, Hudson-Odoi was part of the squads which won the U18 Premier League in 2017 as well as back-to-back FA Youth Cup titles. His form at youth level was rewarded in January 2018 when he was handed his senior debut and he has since made over 20 appearances for the club.

Hudson-Odoi also enjoyed considerable success at youth level for England, being part of the squad which ended as runners-up in the UEFA European Under-17 Championship and which won the FIFA U-17 World Cup in the same year. In March 2019, he became the youngest player to debut in a competitive match for England, doing so in UEFA Euro 2020 qualifiers against the Czech Republic.