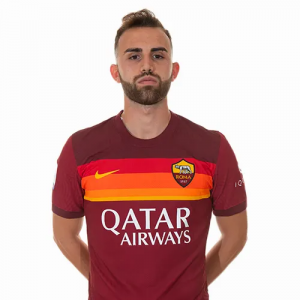 Borja Mayoral Moya (born 5 April 1997) is a Spanish professional footballer who plays as a striker for Roma, on loan from Real Madrid. He has also represented Spain up to under-21 level.

Real Madrid
Born in Parla in the Community of Madrid, Mayoral joined Real Madrid’s youth setup in 2007, after starting out at his hometown club AD Parla. In 2014, he was included in the latter’s Juvenil A squad, and also scored seven goals in the UEFA Youth League, including a hat-trick in a 6–0 group stage win over PFC Ludogorets Razgrad and the team’s goal in their 1–1 draw with FC Porto Juniors in the last 16, being their only player to convert his opportunity in their penalty shootout exit.

Loan to VfL Wolfsburg
On 22 July 2016, Mayoral was loaned to Bundesliga team VfL Wolfsburg for the upcoming season. He made his debut on 20 August in the first round of the DFB-Pokal, replacing goalscorer Bas Dost for the final seven minutes of a 2–1 win at FSV Frankfurt.

Return to Madrid
In August, Mayoral was named Most Valuable Player of the 2017 Major League Soccer All-Star Game for scoring Real Madrid’s goal in their penalty shootout victory at Soldier Field, Chicago.

Loan to Levante
On 31 August 2018, Mayoral was loaned to fellow top division side Levante UD for the season. He scored his first goal on 9 December in a 4–4 draw with Eibar.

The loan was extended for another season on 29 July 2019.

Loan to Roma
On 2 October 2020, Real Madrid announced that Mayoral would be loaned to Roma until 30 June 2022.