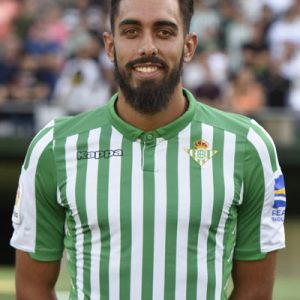 Borja Iglesias Quintas (born 17 January 1993) is a Spanish professional footballer who plays for Real Betis as a striker.

Villarreal
Born in Santiago de Compostela, Province of A Coruña, Galicia, Iglesias graduated from Villarreal CF’s youth setup after stints at CD Roda and Valencia CF. He started his senior career in 2012, with the former’s C team in Tercera División.

Celta
Iglesias joined RC Celta de Vigo on 9 July 2013, signing a two-year deal with an option for a further three and being assigned to the reserves in Segunda División B. On 3 January 2015 he made his first-team – and La Liga – debut, coming on as a 78th-minute substitute for Santi Mina in a 1–0 away loss against Sevilla FC.

On 11 December 2016, after scoring a brace in a 3–2 away defeat to Caudal Deportivo, Iglesias became Celta B’s all-time top scorer with 53 goals, surpassing Goran Marić. He topped the third tier charts at 32, being essential as his team sealed a play-off berth.

On 6 July 2017, Iglesias was loaned to Segunda División club Real Zaragoza for one year. He scored his first goal for his new team on 27 August, the equaliser through a penalty kick in a 1–1 home draw with Granada CF. Additionally, he scored braces against Córdoba CF, Sevilla Atlético, Real Valladolid and CA Osasuna, taking his tally up to 15 goals.

Espanyol
On 9 July 2018, Iglesias signed a four-year contract with RCD Espanyol with a buyout clause of € 28 million. He made his official debut for the club on 18 August, starting in a 1–1 home draw against former club Celta. In his next appearance, he helped the hosts defeat Valencia CF 2–0 after profiting from a Cristiano Piccini mistake midway through the second half.

Iglesias scored three goals over two legs in an aggregate 7–1 win over Ungmennafélagið Stjarnan in the second qualifying round of the UEFA Europa League in late July and early August 2019.

On 14 August 2019, Iglesias moved to Real Betis after agreeing to a five-year deal for a fee of €28 million, reuniting with his former Espanyol manager Rubi.