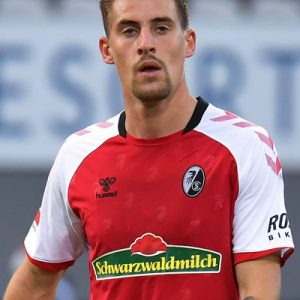 Baptiste Santamaria (born 9 March 1995) is a French professional footballer who plays as a midfielder for Bundesliga club SC Freiburg.

Career
Santamaria is a youth exponent from Tours FC. He made his Ligue 2 debut on 18 October 2013 against CA Bastia replacing Bryan Bergougnoux after 88 minutes in a 1–2 away win at the Stade Armand Cesari.

On 25 June 2016, Santamaria joined Ligue 1 side Angers SCO after a transfer fee offer of €400,000 from Angers to Tours had previously been rejected by the latter.