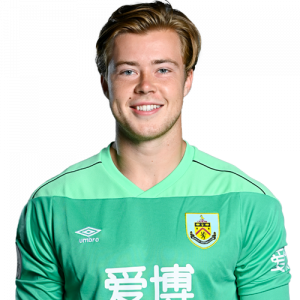 Bailey Peacock-Farrell (born 29 October 1996) is a professional footballer who plays as a goalkeeper for Premier League club Burnley and the Northern Ireland national team.

Peacock-Farrell played in Middlesbrough’s youth system before signing for Leeds United in 2013. He signed his first professional contract in June 2015 and made his first-team debut in April 2016. He went on loan to National League North club York City in October 2017. Peacock-Farrell broke into the Leeds first team late into the 2017–18 season and made his debut for the Northern Ireland national team in May 2018. He started the 2018–19 season as Leeds’ first-choice goalkeeper before losing his place to Kiko Casilla in January 2019. Peacock-Farrell signed for Premier League club Burnley in August 2019.

Peacock-Farrell signed for Premier League club Burnley on 2 August 2019 on a four-year contract with the option of a further year for an undisclosed fee, reported by BBC Sport as £2.5 million. He was signed to provide competition with Joe Hart and Nick Pope after the departure of Tom Heaton. On 28 November 2020, Peacock-Farrell made his league debut for Burnley in 5–0 away defeat against Manchester City.

After impressing as Leeds’ first-choice goalkeeper, Peacock-Farrell was named in the Northern Ireland squad in May 2018 ahead of friendlies against Panama and Costa Rica. He made his debut on 30 May against Panama as a half-time substitute in a 0–0 draw. Peacock-Farrell revealed in September that he had been approached by members of the England national team staff about the possibility of changing his allegiance, which he would be able to do since he had not yet made his competitive debut for Northern Ireland. Peacock-Farrell, however, affirmed his wish to represent Northern Ireland, who had shown interest in him at an early stage. He made his competitive debut for Northern Ireland on 8 September, starting in a 2–1 home defeat to Bosnia and Herzegovina in the 2018–19 UEFA Nations League.