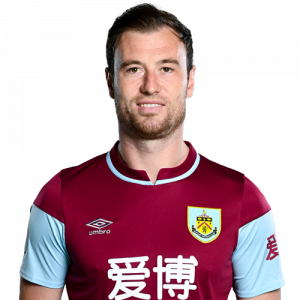 Ashley Luke Barnes (born 30 October 1989) is an English professional footballer who plays as a striker for Premier League club Burnley.

Barnes previously played for Paulton Rovers, Plymouth Argyle, Oxford United, Salisbury City, Eastbourne Borough, Torquay United and Brighton & Hove Albion. He was capped by Austria at youth international level, making one appearance for their under-20 team in 2008, but his application for Austrian citizenship was rejected in 2019.

On 10 January 2014, Barnes joined Burnley for an undisclosed fee on a three-and-a-half-year deal. On 8 November, he scored the only goal at Turf Moor to defeat Hull City and gain Burnley’s first win of the Premier League season. He scored a second goal on 13 December, the sole goal in a home victory over Southampton to take Burnley out of the relegation zone. In November 2019, Barnes signed a new contract with Burnley until June 2022.

In February 2015, Barnes performed a high tackle on Chelsea’s Nemanja Matić, who was sent off for pushing him in retaliation. Barnes did not receive a booking for the challenge, and The FA confirmed that they would not take retrospective action as that was not normal procedure for attempted tackles. Barnes was publicly criticised by Chelsea manager José Mourinho, and said of the criticism “I found that hilarious”.

On 24 May 2015, as relegated Burnley finished the season with a win over Aston Villa, Barnes was taken off with knee cruciate ligament injuries, which would rule him out for the majority of the following campaign.

On 13 April 2019, Barnes was booked “in the strangest of circumstances” for kissing defender Joe Bennett during a match against Cardiff City.

On 21 January 2021, Barnes scored the only goal via a penalty in a 1–0 away league win over Liverpool, handing them their first league defeat at Anfield in 68 matches. This ended Liverpool’s unbeaten home run in the league which stretched back to April 2017. With Barnes also totalling the 100th goal of his senior career.

International career
While born in Bath to English parents, it was believed that Barnes could qualify to represent Austria courtesy of his paternal grandmother, who was from Klagenfurt, if he were able to acquire Austrian citizenship. He was spotted by Austrian officials while on a pre-season tour with Plymouth Argyle in July 2008, and as a result he was called up to their Under-20 team to face Switzerland on 19 August 2008, the match was part of a four nation friendly tournament featuring Austria, Germany, Italy, and Switzerland. Barnes made his debut as a substitute in the 73rd minute replacing FC Wacker Innsbruck’s Julius Perstaller in front of 250 spectators.

Barnes said in April 2015 that he had had no further contact with the Austrian Football Association, and stated that he was open to representing either England or Austria at senior level if given the opportunity. In March 2017, whilst playing in the Premier League for Burnley, he again confirmed apparent eligibility for both England and Austria, and expressed a desire to represent the Austria national senior side. His form in the 2017–18 season led to calls in Austria for him to receive a national team call-up, and manager Franco Foda confirmed in March 2018 that he was monitoring Barnes.

Barnes started his application for naturalisation as an Austrian citizen in 2018, but it was ultimately unsuccessful after it was rejected by the Austrian Ministry of the Interior in February 2019, thus confirming his ineligibility to represent Austria.