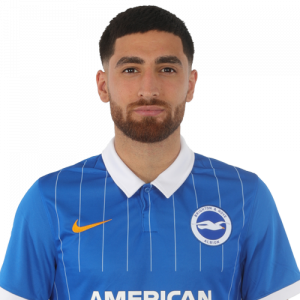 Alireza Jahanbakhsh Jirandeh (born 11 August 1993) is an Iranian professional footballer who plays as a winger and attacking midfielder for Premier League club Brighton & Hove Albion and the Iranian national team. He represented Iran at the 2014 FIFA World Cup, 2015 AFC Asian Cup, 2018 FIFA World Cup and the 2019 AFC Asian Cup. Jahanbakhsh also represented Iran at the U20 and U23 levels.

On 25 July 2018, Jahanbakhsh transferred to Premier League side Brighton & Hove Albion for an undisclosed club record fee, signing a five-year contract. He announced on his Instagram that he will wear number 16, the same number he used to wear in his first season at NEC.

On 11 August 2018, Jahanbakhsh made his debut for Brighton as a substitute in the club’s opening match of the Premier League season against Watford. Even though he played 25 matches in the season due to injuries and poor performance he amounted no goals and no assists.

2019–20 season
With the managerial change at Brighton with Graham Potter replacing Chris Hughton, Jahanbakhsh rarely found himself in the match squad until 8 December 2019 when he came in as a substitute in a match against Wolverhampton. On 28 December 2019, he scored his first goal for the club on his first start against Bournemouth. Alireza was overcome with emotion and was seen crying after scoring his first ever goal for his club. On January 1, 2020, he scored an equalising bicycle kick goal for Brighton against Chelsea. The goal against Chelsea was later voted by people as the Premier League Goal of the Month for January, in which Jahanbakhsh described it as the best goal he has ever scored.

2020–21 season
Jahanbakhsh came on as a sub in the Brighton’s opening day of the season in a 3–1 home loss against Chelsea in the league. He scored a cracker in the next game, a 4–0 home thrashing over Portsmouth in the EFL Cup on 17 September. He scored again 6 days later again coming in the EFL Cup, this time a 2–0 away win over Preston.