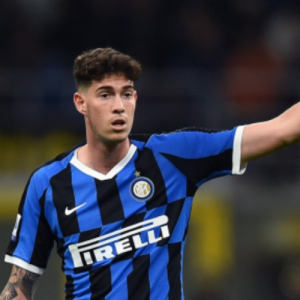 Alessandro Bastoni (born 13 April 1999) is an Italian professional footballer who plays as a defender for Serie A club Inter Milan and the Italy national team.

Atalanta
Bastoni progressed through various age groups at Bergamo, including making nearly 30 appearances for the under-17 side, before eventually progressing to the Primavera side, where he established himself as a regular starter at the centre of defence. He was named on the first-team bench for the first time on 30 October 2016, for the game against Genoa, and made his full debut a month later in the Coppa Italia game against Pescara, playing the full game in a 3–0 victory. In Serie A, Bastoni remained as an unused substitute for the six games after Genoa until making his debut in a 1–0 win over Sampdoria on 22 January 2017, playing full 90 minutes.

Inter Milan
On 31 August 2017, Inter Milan announced the signing of Bastoni for €31 million, and on the same day, his loan at Atalanta for the next two seasons. Inter officially recalled defender Alessandro Bastoni early from his loan with Atalanta and renewed his contract until 2023 on 14 July 2018. On 7 October 2020, Bastoni tested positive for COVID-19 whilst with the Italian under-21 national team.